Plasma Cutting vs. Oxy-Acetylene: Everything You Should Know!

Plasma Cutting vs. Oxy-Acetylene: Everything You Should Know!

Are there any major differences between plasma cutting and oxy-acetylene?

Whoa! You don't want to ask that question around a welder. It's like a civil war among welders about which one is the best. Don't even be surprised if you see welders tattooing on their arms "Plasma Cutting Rules" or "Oxy-Acetylene All the Way". Apparently, technology advancements gave birth to such debates as well!

So, why are there so many debates? The major reason is both of them are effective. But, there are some key differences which make them significant. Today, we'll dive into the debate of plasma cutting vs. oxy-acetylene and try to explore the major differences.

What is Plasma Cutting?

It's basically a welding process of melting. In this process, welders use a jet to melt metal. This jet is equipped with ionized gas that can melt with 20,000°C temperature or more.

A plasma arc is formed in the process which has a cathode and an anode. The cathode is an electrode and the anode is the workpiece. The electrode of the plasma torch has a gas nozzle that creates the plasma to cut through metals. It's basically a stream of plasma gas that's being heated with electricity.

In the plasma cutting process, the plasma arc jumps to the nozzle from the electrode and cuts through electrically conductive metal. Plasma cutters are mainly used for cutting conductive material like stainless steel, mild steel, and aluminum.

A lot of the other metals are conductive too, such as alloy steels, carbon steel, cast iron, titanium, etc. But, the material thickness and their melting temperature play a large role in precision cutting which is sometimes difficult with plasma cutters.

As the name suggests, this welding process uses oxy-fuel torches. The fuel is mostly acetylene, hence the name. An extremely heated flame is generated with the chemical reaction of acetylene and its combination with oxygen that can cut through even the thickest metal. The flame burns the metal and turns it into iron oxide to melt the heated area.

Oxygen and the fuel is stored in fuel source tanks under high pressure. There's a regulator on the fuel tank that can be used to control the gas pressure and the oxy-acetylene torch.

In the oxy-fuel systems, a filler rod is used to melt the base metal. The tip of the combination torch streams the heat output to generate the flame.

Just like plasma cutting, oxy-fuel cutting systems also have some downsides that you can't ignore.

Before we announce the winner of the battle between these two welding methods, we have to discuss about the primary differences between them.

As oxy-fuel torches create a larger impact area, it's harder to get a cleaner cut. On the other hand, plasma cutters are much more useful for precise cutting.

Plasma cutters have become lighter than ever with the new inverter technology. You can easily carry the whole machine and take it anywhere you want. However, it requires electricity to run the machine which could be a drawback. The input power might initiate additional costs which would increase the overall actual costs.

Plasma cutters might provide a cleaner cut, but they're not the best option if power is your primary concern. They can cut through metals with 2-inch of material thickness at best like mild steel, stainless steel, or aluminum.

On the other hand, an oxy-acetylene cutter can cut through ferrous metals with a couple of inches of thickness to 24-inch of thickness! Oxy-fuel cutting systems can generate a high-temperature heat source that's best for cast iron and alloy steels.

When it comes to the price range and affordability, the comparison starts to get a bit tricky. 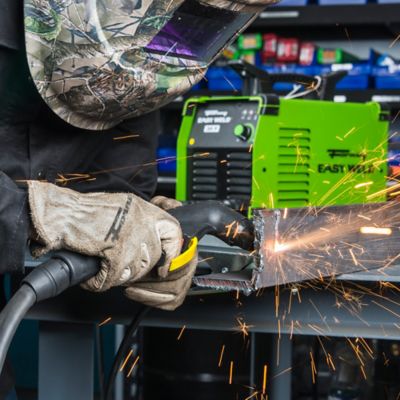 Which One is Better: Plasma Cutter or Oxy-Acetylene Cutter?

And now, it's time to announce the winner among the welding methods. And the winner is- both of them!

Well, don't be surprised. The thing is, you can't draw a clear line among the two to announce the winner. Both of them have significant effectiveness in their line of work.

If you're working with thinner metals and need precise cut, plasma cutting is the right option for you. And if you need to cut thick metals and don't care about precision much, then oxy-fuel welding is the perfect choice for you.

While you'll enjoy working with both oxy-fuel torches and plasma cutters, you have to choose the type based on your work. We hope you'll be able to make an informed decision after going through our guide to plasma cutting vs. oxy-acetylene. Happy welding!

Brandon made the Fixit Man Blog in 2017. After having a blissful 10 years of the opportunity of working in welding, his goal is to give back to the society and my fellow men who might not have gathered that much experience but if given a chance can shine and excel.

You can check out his blog at fixitmanblog.com